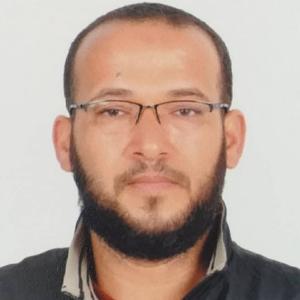 The use of waste cooking oil for biodiesel synthesis reduces the cost of raw materials. After studying the appropriate conditions for biodiesel production in terms of the ratio of waste oil to methanol, the effect of reaction temperature, and the effect of reaction time by conducting a transesterification reaction with 1.0 %w/v sodium hydroxide as a catalyst. It was found from the analysis that the best ratio for biodiesel production is 1:3 ratio of waste oil to methanol, the best reaction temperature is at 60oC, and the best stirring time for the reaction mixture is 40 minutes. A large amount of biodiesel was prepared by applying the best conditions required to obtain the highest yield of the biodiesel, which was equal to 87.19% w/w after a five times wet washing process by 30 mL of distilled water. It was also found that the acid equivalent of biodiesel was 2.53 mg KOH /g, and biodiesel density ranged from 0.80 to 0.843 g / mL. The study proved that the biodiesel production process using waste cooking oil is technically feasible and inexpensive.
Khaled Asagheer O Hreeba(1-2022)
Publisher's website

In this study the quality of ground water in the city of Janzour ± Libya was studied. 27 samples of well water were collected with depths ranging between 18 - 160 m covered most areas in the city and some of their chemical properties including pH, electrical conductivity, total dissolved salts, and the concentration of nitrate, sulfate, sodium, potassium and calcium ions were determined and compared with the Libyan National Center for Standardization and Metrology. The results showed that the most samples did not exceed the maximum limit according to Libyan and world standard except W6 (Alirifi Asharif school) and W10 (Abd Aljalil Alirifi farm) which have high concentration of Sodium (200mg/l). Also noted that the amount of total dissolved salts is 50% of the samples were less than 100 mg/l which is the minimum amount according to the Libyan sta ndard.
خالد الصغير عمر حريبة(1-2018)
موقع المنشور