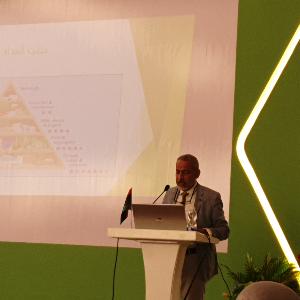 The effect of low and high doses of Salmonella enteritidis PT4 (SE) on immunocompetent cells in caecum and spleen of one-day-old chicks was investigated. Subsets of T lymphocytes positive for CD3, CD4, CD8 and B lymphocytes (Bu1b-positive cells) were counted in the caecum after immunohistochemical staining and the relative percentage of these cells in the spleen was analysed using a FACScan cytometer on days 7, 10, 14, 21, and 27 post-inoculation (pi). In the low dose group, the number of CD3+ and CD4+ cells in the caecum had significantly increased at day 10 pi. Both CD8+ and Bu1b+ cells were significantly higher on day 14 pi in this group. In the high-dose group, the number of CD4+ cells had significantly increased at day 7 pi. CD3+, CD8+, and Bu1b+ cells showed prolonged proliferation at days 7 up to 21 pi. Splenic lymphocytes demonstrated significant changes only in the high dose group. The percentage of splenic CD4+ cells was decreased at day 7 pi. A decrease in CD3+ and CD8+ cells was found at day 14 pi in this group.
Abdulatif Asheg(11-2002)
Publisher's website

A study was conducted to determine the effect of three native plants from El-Jabal al ELAkhdar, (Libya) on performance and cecal coliform count of broiler chickens. A total of 1260 one-day-old male Cobb chickens were used in the experiment. The birds were assigned to 7 treatment groups (6 replicates per treatment). The dietary treatments included basal diet with no additive (control), and 6 other dietary treatments (Arbutus pavarii, Salvia officinalis and Zizyphus Vulgaris) each of which was added at the rate of 0.5 g and 1 g/kg of basal diet. Results explicitly revealed that all dietary treatments had a significant effect on body performance of broiler chickens compared to the control with the exception of the dietary treatment of S. officinalis at dosage of 0.5 g/kg that has expressed noticeable reduction in body weight. Coliform counts in the cecum of birds receiving 1% A. pavarii and 1% Z. Vulgaris were significantly lower (P ⩽ 0.05) than those of control group from early weeks of treatments, whereas all plant shows a significant lowering (P ⩽ 0.05) of cecal coliform count during the rest of experiment compared to control group. These results emphasize the potential biotic role of such plants together with the immune modulating effects on treated birds. However, further pharmacological and clinical work should be adopted in the future to present an obvious understandable theory behind the potential beneficial as well as side effects of such natural plants.
A. A. Asheg (12-2015)
Publisher's website

Chicks (1-d-old, three groups, each containing 50 chicks) were inoculated with 2×102 and 2×108 CFU ofSalmonella enteritidis; the third group were kept as uninoculated control. Five birds from each group were euthanized at intervals from 6 h to 4 weeks post-inoculation (pi). In the lowdose groupS. enteritidis was isolated from 60% cecal samples at 18 h pi. and from 20% of livers at 3 d pi. Individual variation in the frequency ofS. enteritidis recovery was observed in this group. The clearance of salmonella from the organs was faster in the low-dose group, and salmonella was not isolated from the liver and cecum at 21 and at 27 d, pi, respectively. However, in the high-dose group,S. enteritidis was isolated from all ceca and 80% of liver 6 h pi, and salmonella was detected in the cecum and liver throughout the experiment. Serous typhlitis and unabsorbed yolk sac were the most prevalent lesions in both groups. Granulomatous nodules in the cecum were found occasionally in some cases in both inoculated groups, which can play a role as reservoirs in carrier chicks.
A. A. Asheg(10-2001)
Publisher's website

Spreading of Salmonella enteritidis in the cecum of chickens

Adhesion and colonization of high (2 × 108 CFU) and low doses (2 × 102 CFU) ofSalmonella enteritidis (phage type 4) was determined in the ceca collected 6 h-4 weeks after inoculation (pi), of 1-d-old White Plymouth Rock orally-inoculated chickens.S. enteritidis was associated with the epithelial surface of the villi in the low-dose group 18 h-7 d pi, the penetration in the cecal lamina propria was observed on day 1 and 10 pi. In the high-dose group, adhesion and colonization was observed in all birds killed 6 h-14 d pi; penetration of the bacteria into the cecal lamina propria was seen 1–21 d pi. Large numbers of macrophage-like cells containingS. enteritidis were observed in the cecal lamina propria on days 3–21 pi. Colonization and migration byS. enteritidis in the intestinal tract of chickens was shown to be dose dependent.
A. A. Asheg(3-2003)
Publisher's website

To determine the effect of different doses of Salmonella enteritidis on immunocompetent cells, the thymus, bursa of Fabricius, and peripheral blood were examined. One-day-old chickens were orally infected with 2 × 102CFU/ml (low dose) and 2 × 108 CFU/ml(high dose) of S. enteritidis PT4. Subsets of T lymphocytes (CD3, CD4, and CD8), and BU1b cells using an indirect immunofluorescent method and flow cytometry were analysed on days 7, 10, 14, 21, and 27 postinoculation (dpi). The actual number of lymphocytes in the peripheral blood showed a significant increase in the low dose group (P < 0.05) on day 21 pi, and in the high dose group on day 27 pi (P< 0.001) compared to controls. The increase of CD3+, CD4+, and CD8+ T cells was observed in both infected groups compared to the controls from day 14 pi, significant on day 21 pi (P < 0.05) in the high dose group. The subpopulation of CD8+ was higher also on day 27 pi (P < 0.01) compared with the values of the control group. The subpopulation of BU1b+ B cells in both infected groups showed higher values, but without significant differences from controls. The thymus T lymphocytes showed a significant decline in CD3+ T cells on day 7 pi, whereas CD4+ T cells were significantly (P < 0.05) increased on day 7 pi in both infected groups. The bursal lymphocytes showed a decrease in BU1b+ B cells in both infected groups compared with the control group, significant in the high dose group on day 21 pi (P < 0.05). These results indicate that S. enteritidis infection induced the changes in immunocompetent cells, included cellular and humoral immune response. Salmonella infection accelerated the maturation and differentiation of thymus T cells in the first phase of infection, what was secondarily reflected by increased number of studied T lymphocyte subpopulations in the peripheral blood from day 14 to 27 after infection. Similarly, it appears that the activation of B cells in bursa of Fabricius caused the decrease number of bursal B lymphocytes and increased number of these cells in the peripheral blood from day 14 to 27 pi in both infected groups.
A. A. Asheg(3-2003)
full text Publisher's website

A study was conducted to determine the effect of three native plants from El-Jabal al ELAkhdar, (Libya) on hematological profile, cholesterol and immune response to ND vaccine in broiler chickens. A total of 1260 one-day-old male Cobb chickens were used in the experiment. Chickens were assigned to 7 treatment groups (6 replicates per treatment). The dietary treatments included basal diet with no additives (control), and 6 other dietary treatments (Arbutus pavarii, Salvia officinalis and Zizyphus Vulgaris) each of which was added at the rate of 0.5g and 1g/kg of basal diet. Results explicitly revealed that no significant change in TLC between the treated and control groups has been recorded. A significant heteropenia was recorded at the third week of treatment with 1% A. Pavarii 0.5 S. Officinalis and 0.5 Z. Vulgaris when compared to control group. However, the lymphocytic count show a significant increase (P≤0.05) in all treated groups compared to the control groups. Immunologically, an enhanced humeral immune response was very obvious based upon the significant elevation of antibody titer at the third week of treatment for all groups received 1 % of the three types of plants. Interestingly , cholesterol levels were significantly elevated at the six week of treatment with 0.5 % Z. Vulgaris while highest decline in cholesterol levels were recorded in group that have received 0.5 S. Officinalis.
ِAbdulatif A. Asheg(3-2015)
full text Publisher's website

In order to study microscopic and macroscopic lesions in chickens infected with low and high doses of Salmonella enteritidis PT 4 (SE), 150 one-day-old White Plymouth Rock chicks were divided into three groups each containing 50 birds. The chickens of the first and second groups were inoculated with 2 x 102 and 2 x 108 cfu of Salmonella, respectively. The chicks of the third group were kept as uninoculated control birds. Five birds from each group were euthanized by cervical dislocation at 6, 12, 18 hours post inoculation (hpi) and then after 1, 3, 7, 10, 14, 21, and 27 days post inoculation (dpi) and were examined for presence of gross and histological lesions. Catarrhal typhlitis and unabsorbed yolk sac were the most prevalent gross lesions in both groups. Histologically, granulomatous nodules in the caecum were found occasionally in some cases in both inoculated groups. The present study demonstrated that the chickens infected with a low dose of SE showed fewer lesions, which were milder in comparison with the birds inoculated with a high dose of SE. It suggests that chickens were able to capture the pathogen in the low dose group
Abdulatif Asheg(1-2001)
Publisher's website